THIS horror video shows the moment two sharks maul each other in front of beachgoers turning the water red with blood.

The underwater predators go head-to-head in the 11-second clip as they battle it out in shallow water and create pools of blood in their wake.

The unverified footage showed two beachgoers watching on as the apex predators flipped and spun in the water.

At one point, a third person walks into frame and pulls one of the men aside as one sharks manages to push itself ashore before being dragged back in.

It comes as live footage caught the moment a woman tripped and fell into a shark tank during feeding time.

The nail-biting footage shows two predators circling around the worker who fell into the tank at the worst possible time. 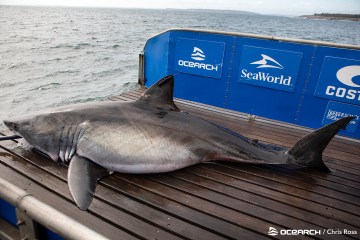 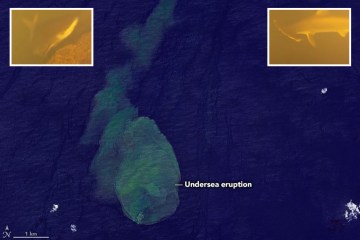 The accident happened at the shopping mall Wuyue Plaza in Jiaxing, east China’s Zhejiang Province before its opening.

The lucky member of staff was eventually pulled out of the water without a scratch, local media reported.

Shocking CCTV footage shows the woman walking along the footage bridge before tripping over the tank’s open lid.

She can be seen plunging into the water- coincidentally just moments before the sharks’ feeding time.

She can be seen swimming while being surrounded by the two lemon sharks.

Meanwhile, a crowd gathers at the bridge trying to help her and finally are able to pull her up.

A spokesperson for the shopping mall said the staff member was in a rush because she was late for a meeting so she used the bridge as a shortcut.

They added: “The gangway is off-limits during feeding time but the employee was in a rush to get to a meeting.

“She was quickly rescued from the tank and did not suffer any injuries.”